The Nitro Venom Break Barrel air rifle features nitro piston technology. This gun works in a similar way as a spring gun does; the only difference is that this gun has a ram that is filled with nitrogen gas instead of the coiled spring that is usually present in spring guns. Inside the gun chamber, there is the piston and the nitrogen cylinder. The nitrogen cylinder is automatically held under an absolute pressure. Any application of extra pressure when the gun is cocked causes the trigger to move. In this Crosman Nitro Venom Break Barrel Air Rifle Review, we will look at this air rifle’s features, product pros and cons and consumer FAQs. 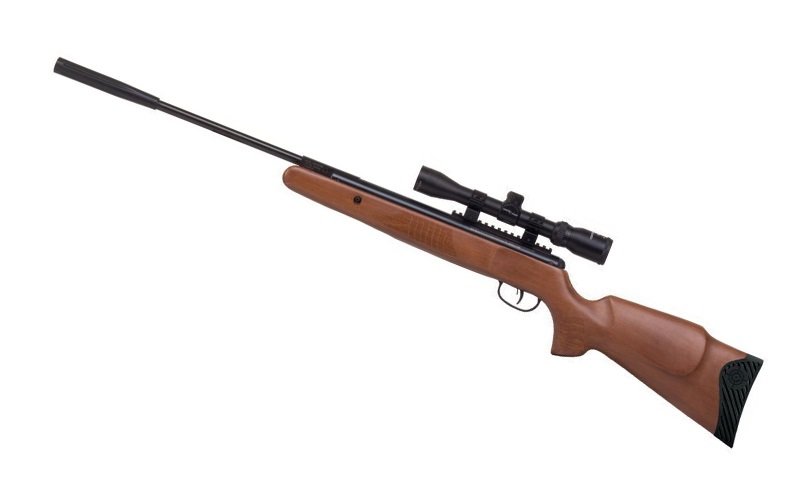 The Crosman Nitro Venom has an optical rail that is designed using the picatinny style, which gives the gun an adequate mounting platform that enables it to work effectively. The rail is 5mm wide, thus allowing the notches to have a proper spacing interval in between them. It is easy to operate and position the gun when pointing it at the target due to its flexibility. It has such a strong optic rail that uses the picatinny design,

This product does not have an open sight because it effectively works with magnification to promote a clear view for the user. At the center point scope of the gun, there is a 3-9×32 mm sighting device that magnifies objects. Thus, the positioning of the gun as well as targeting becomes easier. Additionally, the magnifying lens can be adjusted to the user’s best position.

The Crosman Nitro Venom is very efficient thanks to the optic rail and picatinny design in conjunction with the magnifying lens. These features are inbuilt to ensure that the user can set and maintain the target point. It makes this product highly effective. Notably, for accuracy to be maintained, the user does not need to be close to the target.

Apart from the gun being noisy, the Crosman Nitro Venom Air Rifle is highly convenient to the user. It is lightweight, thus making is easy for the user to carry it around. The rifle is not affected by the weather which makes it functional in all environments and climates. Also, the rifle easy to operate and highly effective, thus making the user’s experience successful.

Q: Can this gun make more than one shot or it is strictly a single shotgun?

A: This product can only do a single shot at a time. This means that the user has to load one pellet at a time and then repeat the procedure all over again.

Q: Is the noise produced when shooting too high to the extent that it draws attention?

A: Yes, the gun makes a significant amount of noise that can be unpleasant.

The Nitro Venom Break Barrel Air Rifle powered by a nitro piston is a high-tech gun that makes use of nitrogen gas instead of a coiled spring. The product is easy to use and possesses high accuracy levels. Also, the product requires minimal maintenance as it is made of quality materials. Moreover, the product works well in all conditions and situations as it is not affected by climate or environment. The product is locally available in outlets that are authorized to sell weapons, but the user must obtain a license from the federal government for security purposes.