Every hunter’s main objective is to catch game, and achieving this goal largely depends on how effective his or her riflescope is. The more effective a hunter’s scope is, the higher the hunter’s likelihood of achieving his or her goal of catching game on a hunting trip. In this regard we are happy to introduce you to the Pulsar Digisight 850 LRF Digital NV Riflescope which ranges among the most effective riflescopes on the market in its price range. The Pulsar Digisight 850 LRF Digital NV Riflescope review below will touch on the many features of the scope, its specifications, and deal with some question that buyers frequently ask. We trust this will aid you in making the right decision if you are in the market looking for a very good scope to buy. 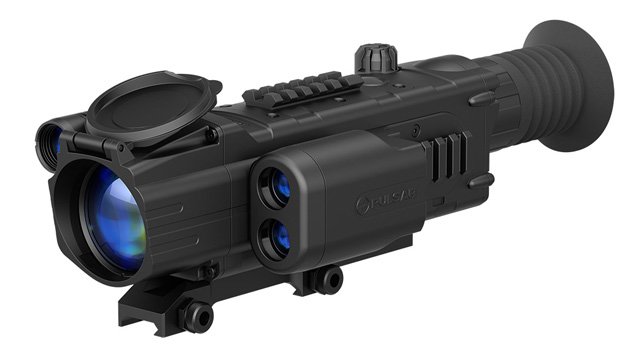 One of the most notable characteristics of the Digisight 850 is its ability to produce very excellent images. The device is able to deliver very clear pictures thanks to a number of powerful features that it comes with such as a 640 x 480 OLED display, a 4.5x magnification and its 2x digital zoom that can raise the range of magnification up to as high as 9x.

The Digisight is designed to deal with the challenges most riflescopes face when it comes to ranging faraway targets swiftly and accurately. How does this device do that? The Digisight is engineered with a built-in laser rangefinder that allows you to determine the exact distance to your target up to about 450 yards away. As if that is not enough, the scope’s 2x digital zoom function gives you the opportunity to extend the magnification range up to about 9x, thereby allowing the device to detect targets that are as far away as 650 yards regardless of whether it is day or night. When you have the integrated laser rangefinder turned on, you get to save time and reduce your likelihood of missing shots since the feature will automatically calculate for you the right range for taking both uphill and downhill shots.

The Digisight 850 comes loaded with as many as 13 selectable electronic reticles. This very useful feature gives you the luxury to choose among several options for different situations. For example, you have the option to turn the center of the reticle either green or red to suit your need. The feature also allows you to switch between black and white subtensions. All these things come together to significantly promote accurate targeting.

Another very outstanding feature of the Digisight is its excellent Weapon Tilt and Elevation function which plays a very instrumental role in improving precision. How does this work? The weapon tilt indicator works by helping you keep your preferred weapon upright to enhance precision while the primary function of the elevation indicator, on the other hand, gives the angle your weapon is being aimed.

The Digisight 850 is engineered with three types of zeroing parameters memorization for different types of weapons as well as for different distances.

Another innovative feature of the Digisight is its inbuilt laser IR illuminator which significantly increases viewing range and enables you to clearly see your target(s) during low light conditions or in total darkness. Furthermore, the laser IR comes with a three-step power adjustment feature for use in conditions where illumination is varied.

In situations where the atmosphere isn’t very bright, the scope’s Sum Light™ processing program can be used instead of the IR Illuminator to enhance the image of your target.

Q. Who are the manufacturers of Pulsar Digisight 850 LRF Digital NV Riflescope?

A. The Digisight riflescope is manufactured by Pulsar, which is one of the household names in the night vision industry.

Q. What colors are the Digisight 850 Riflescope produced in?

A. The Digisight 850 is currently manufactured in only one color, black.

Q. Does the riflescope come with a case?

A. Yes, it does. The riflescope has a very useful carrying case.

Q. How many batteries does this device operate on?

A. It requires four AA batteries.

Q. Does this scope have a low battery indicator?

Q. Does the riflescope come with a warranty?

A. Yes, it does. The manufacturers support the scope with a 3-year warranty.

Q. What are the dimensions of the riflescope?

Q. What is the diopter adjustment of the scope?

A. The Digisight has a diopter adjustment of ±4.

Q. Can the device use an external power source?

A. Yes. The Digisight can take power from an outside source when the battery runs down.

Q. What is this scope’s operating temperature?

Q. What is this scope’s battery life?

Q. What is the eye relief of the scope?

Q. Apart from the Digisight, what other items are included in the package?

A. Besides the Digisight 850, you also get the following items: a carrying case, a video cable, a mount, three screws, a Hex-nut wrench, a user manual, a lens cleaning cloth and a wireless remote control.

Having read the Pulsar Digisight 850 LRF Digital NV Riflescope review above and seeing its numerous technologically advanced features such as the inbuilt Rangefinder, the Selectable Reticle, the inbuilt Eye Laser IR illuminator, the Sum Light™ processing program and the 640×480 Resolution OLED Display, among others, we believe you now understand why many hunters consider the Digisight 850 LRF Digital Riflescope as one of the most resourceful and versatile riflescopes on the market. If you are a serious hunter with the desire to make your hunting expedition a success, then the Digisight riflescope is worth considering.