Wyoming is big on hunting, and related activities account for a significant portion of the State’s economy. Moreover, there are many attractive species in this part of the country, some of which are not found in other areas.

This text, the cumulative effort of perusing hundreds of pages of Wyoming Game and Fish Department (WYGF) documentation, is designed to give readers basic information on hunting in the Cowboy State. This document will familiarize you with practically all of the important things you need to know about hunting in Wyoming, ranging from acquiring a hunting license to the general hunting regulations in the state. Furthermore, the document contains numerous links to the aforementioned WYGF documents and websites, should you need a further explanation or official confirmation of anything contained herein.

There are three primary ways a person can go about purchasing a license to legally hunt in Wyoming. The most espoused method is doing so online. Second is by visiting one of the license selling agents located throughout the State and completing the transaction over-the-counter. The third option is to download a hunting license application in the form of a PDF file, print and then mail it back to the WYGF. Purchases made over the internet have to be paid for by credit card. That said, check or money order is currently the accepted means of payment for purchases made via snail mail.

In general, all hunters, both resident, and nonresident, who are at least 12 years old must be licensed.  Hunters within the age range of 12 to 17 have the option of purchasing youth licenses with cost less than those for adults.

Wyoming hunting licenses are split into categories, with the one a hunter will apply for usually being dependent on what species he or she is pursuing.  In general, licenses are moderately-priced for residents but cost much more for nonresidents, especially adults.

A hunter born after 31 December 1965 who uses firearms is  required to successfully complete a State-approved hunter education course before being issued a license. Those who have not done so yet still wish to hunt can take advantage of the WYGF’s Hunter Mentor Program (HMP). Through this initiative, a hunter can sign up as a mentee and actually go out into the field to hunt – so long as he or she is accompanied by a mentor.

There is no age limit on mentees, though one has to be at least 12 years old to hunt big game. The mentor has to be a licensed hunter who is 18 years of age or older. For more information on this program, please visit the HMP webpage.

It’s worth mentioning that although a hunter has to wait until the age of 12 to hunt big game, they can apply for such a license at age 11.

Where to Hunt in the State of Wyoming

Wyoming has one of the lowest percentages of privately-owned land in the United States. However, the boundaries between public and private lands are not always clearly demarcated. Despite this reality, a landowner’s permission is still required to enter his or her property, even if it is to retrieve wounded game. As such, hunters are advised to use a GPS app when sporting in Wyoming.

Amongst the lands that the WYGF owns are Wyoming’s Hunter Management Areas (HMAs). Being that these are indeed public lands, hunters can attain access to them. However, a permission slip must first be obtained from the WYGF, which interested parties can apply for using this link.

The WYGF also maintains almost 40 Wildlife Habitat Management Areas (WHMAs), which in total comprise 450,000 acres of State land. An interactive map of Wyoming’s WHMAs can be found here. In terms of partnerships with private landowners, they have quite a few Public Access Areas(PAAs). Moreover, hunters can take advantage of walk-in hunting areas that are also privately-owned yet don’t require special permission to access.

The WYGF has done an excellent job of directing hunters to appropriate areas based on the species they want to take with that Wyoming Hunt Planner website. As such, hunters are strongly advised to utilize this resource when planning their next expedition in Wyoming.

Below are some of the laws which govern hunting in the State of Wyoming. Many of these were ascertained from WYGF’s terse General Hunting Regulation PDF document. However, the various WYGF hunting regulations’ guidebooks (depending on species) can be downloaded from this webpage.

The WYGF has gone the extra mile in providing hunters with information on prominent game species, as some have extensively-detailed season date, tables and hunting-area maps in PDF formats. It should also be noted that there are separate guidebooks for the categories listed below. These can be accessed by visiting their general hunting regulations webpage.

Antelope hunting season begins during the last month of Summer and extends into the early part of Winter. In general, moose and deer can be hunted during the last third of the year. However, some hunt areas are open to deer gaming during the first month after the new year, also. Elk seasons vary greatly but are all within the timeframe of late Summer to mid-Winter.

Bighorn sheep and mountain goat seasons encompass the last quarter of the year. There is also a unique wild bison presence in Wyoming, and these animals can be pursued (in some instances under quota) from late Summer until early Winter.

Black bears can be hunted from Spring into the earlier parts of Fall. However, the mid-Summer months are excluded from their seasons. And the legal time that grizzly bears can be taken is during the first two months of Fall.

The gray wolf is a distinct species you will find in Wyoming. It can be hunted throughout the entirety of Fall, including a couple of weeks before and after its official beginning and end. Mountain lions are another trophy-game species present in the Cowboy State, and they can be taken for over half a year’s span, from the beginning of Fall somewhere into the advent of Spring.

Sage grouse have a very brief season that takes up a couple of weeks at the beginning of Fall. However, grouses of the blue (dusky), ruffed and sharp-tailed varieties can be pursued throughout the entirety of Fall, as well as brief extensions into Summer (at the beginning of the season) and Winter (at its conclusion).

Partridges (gray and Chukar) have their seasons from the beginning of Fall into the middle part of Winter. Pheasants season are held exclusively during the latter part of the year. Cottontail rabbits, snowshoe hares and squirrels (red, grey and fox) have common season dates. They are from early Fall ’til the advent of Springtime. However, their falconry seasons are open year-round.

Wild turkeys have two general seasons annually – one in the Fall and the other in the Spring. The former indeed covers all of Fall and extends ’til shortly after Christmas. The latter is briefer but still gives the hunter a month-and-a-half during the prime of Spring to pursue turkeys.

Mourning doves, rails (sora and Virginia) and snipes can be taken throughout most of the Fall. Sandhill cranes can also be pursued during most of this same timeframe. Nevertheless, in some areas, they can only be done so under a quota with stricter bag limits.

The bulk of the seasons for ducks, mergansers, and coots are also in the Fall, though they continue slightly into Winter. Geese can also be hunted throughout the Fall. In some areas, their season lasts only a week, while in others it extends relatively far into the winter. Under a conservation order, light geese can be taken for an additional couple of months during the ending of Winter.

Falconry is also an acceptable means of taking for mourning doves, rails, duck, mergansers, and coots. The seasons for such occur exclusively within the last quarter of the year.

Furbearing hunting seasons are lengthier than most of the others. Beavers, minks, and muskrats can be taken for over six months from the beginning of Fall to mid-Spring. The seasons for bobcats, martens, and weasels start at a similar time but end about a month earlier. Badgers, on the other hand, can be taken year-round. The furbearers’ hunting seasons also include trapping.

Hunting is not an easy sport, and like any good game, there are coaches, veterans and clubs that are there to guide you along the way. If you decide to use such a service, here are some of the hunting guides and outfitters located in Wyoming:

The State of Wyoming also has an official Board of Outfitters & Professional Guides. Huntsman can use their website to find licensed, government-espoused hunting professionals throughout the State.

Many of the outfitters listed above have camping grounds available for hunters while they are afield. That said, if you are looking for an actual hunting lodge in Wyoming, you can find some listed below.

Hunters in Wyoming are not required to report their harvests to the WYGF. Nonetheless, individual hunters may be chosen to fill out a survey at the end of the hunting season, which the WYGF prefer they complete online. That said, animals still have to be tagged when taken, and the tag has to be present with whoever is transporting the carcass or meat derived from it. Furthermore, it’s vital to note once again that for species whose hunting seasons or areas are sex-specific, evidence of the animal’s sex must accompany the carcass.

Wyoming offers hunters the opportunity to enjoy the true American outdoors, giving them access to large tracts of wilderness that are not present in other parts of the country. And accordingly, the Cowboy State takes hunting very seriously. This should be obvious to anyone who has witnessed the plethora of information available to hunters who are interested in and utilizing this part of the country.

Being that this data is so expansive, we took the time to present many of the most important facts in this condensed document, with links to supporting texts and webpages. As such, we hope it has proven useful to you and also wish you a memorable hunting experience in Wyoming. 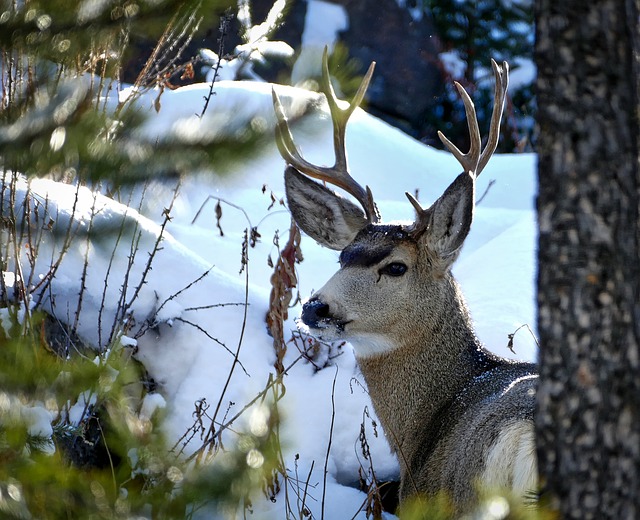 Q. Is an archery license applicable to all species, or do I need a separate one for different animals that I hunt?

A. The archery license gives you permission to use this means to hunt both big game and trophy species.

Q. Does Wyoming have hunter orange requirements, and if so what are they?

A. Yes, the WYGF has established hunter orange rules. However, unlike many other States, hunters have the option of wearing fluorescent orange, fluorescent pink or a combination of both. They can also sport these colors in camouflage if they so desire. With the exception of the special archery season, hunters pursuing big game or trophy animals must wear at least one of these colors in the form of a coat, hat, jacket, vest, sweater or shirt.

Q. How can the proof of sex of a species be verified?

A. Some species have sex-specific hunting seasons and areas. As such, the WYGF requires that hunters of these animals leave proof of sex with the carcass. Accepted proofing parts are the creature’s antlers, head or external sex organs.

Q. I did not see crows in your mention of game species in Wyoming. Is it permissible to hunt them in Wyoming?

A. Yes, crows can be taken in Wyoming. Their season covers the four months around the turn of the year. Archery, falconry, and firearms are permissible means of taking. Unlike other game, a hunter does not need a license to take crows. Additionally, this species does not have a bag limit.